SEX SHOP
Sex toys are objects and aids that people use in sex – when alone, with one or more partners. Although sex toys and aids in modern living are so widely used that there is even an entire industry for their production and distribution, in many countries around the world they are still taboo and even banned for sale and use in some conservative environments. .
This is most likely due to the fact that the use of sex toys is a kind of alternative sexuality, that is, sexuality that is not natural and involves people other than objects. It is certainly an alternative for conservative upbringing and people who choose to adhere to certain religious and philosophical doctrines that prohibit the use of sex aids.
Why do sex toys serve? They are objects and aids used for sexual gratification, and contrary to the belief that they are commonly used by women for self-satisfaction, there are sexist for all types of sex – masturbation, straight sex between two or more partners, gay sex between two or more partners, group sex and bowl / hot sex.
People are generally shy when it comes to sex toys and sex shops, because of prejudices in the society and the environment in which they live, so they are not only banned from using, but also embarrassed to enter the sex shop. This is due to the fact that people who are open about their sexuality and the way they manifest it are still largely stigmatized as perverse, inappropriate, bad, loose and uncultured. Of course, if in one environment people begin to talk about sex toys and devices openly, they will be able to break certain stereotypes of alternative sexuality and of course those who practice it.
The Sex Shop project is about imagining a similar situation where the audience coming into the gallery has the opportunity to see part of a collection of commonly used sex toys and get them to think about the questions that have been raised before. This project is an attempt to recontextualize sex toys as objects of contemporary living by exposing them to an artistic institution, that is, in a more neutral environment where people are more easily relieved of the shame and discomfort they experience when visiting sex shops.
Darko Aleksovski 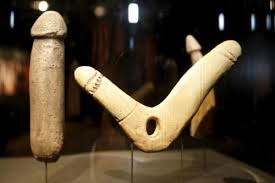